So here's how I'm going to be setting up deployments on my EC2 instance- I'll do a git push of my committed changes from my local machine to my remote repository (I'm hosting mine on Bitbucket; Github is great too) and just do a git pull on my EC2 instance. I should then be able to deploy a new version of my application directly. You could write a shell script to automate this (deployment).

Here's how to configure git on your instance:

Amazon's Elastic Block Storage (EBS) may not be a perfect place to host your database e.g., performance and reliability are common gripes (Reddit once went down for a couple of hours due to this) but it's pretty easy to work with and is fairly flexible. You can also save database snapshots. In any case, I think it would be an interesting experiment to setup a Postgres DB on EBS and potentially check how it scales.

EBS falls under the free tier, as long as your EBS storage is under 30 GB, even with multiple EBS "volumes" [source]. Here are the steps I took in setting up Postgres 9.1 on my EC2 instance using EBS as the datastore: 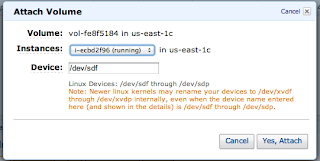 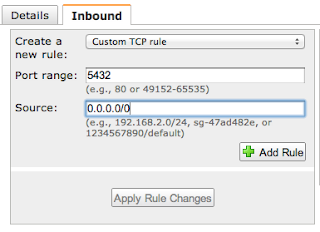 Coding in the Subway

Before joining my current company, I was determined to release my Android app, Bingle. Call it paranoia, but I didn't want any legal trouble, however remote. Just a day before starting work, I hastily tested and released my app, and headed off to visit a relative. 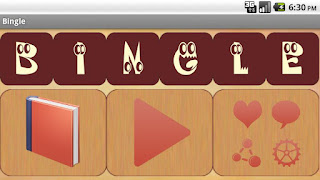 While on the subway, I realized that my app would throw an exception if the device wasn't connected to the internet. I immediately booted up my laptop and fixed the bug. After the train ride, I located the nearest Starbucks, connected my laptop to the wifi and released a new APK file.

Lesson learnt- don't test hastily. Also, I should've looked at my tickets on Bitbucket before releasing my app.
Posted by D at 10:09 No comments:

Email ThisBlogThis!Share to TwitterShare to FacebookShare to Pinterest
Labels: thoughts

In university, I had this eccentric lecturer who'd repeat, almost manically, "Software Maintenance is the worst. Whatever you do, don't work for the maintenance department.". Every lesson. EVERY LESSON!

One of my slacker friends, who barely attended class, was once caught daydreaming. "Slacker, I've never seen you in class before. Do you take this course?". Without missing a beat, this guy says "Maintenance department".

(I just fixed a rather infuriating bug today and was reminded of this story.)
Posted by D at 20:53 No comments:

Email ThisBlogThis!Share to TwitterShare to FacebookShare to Pinterest
Labels: thoughts

The next step would be to associate an elastic IP with your EC2 instance and setup an Apache server:

Here is a short description of how to get started with an EC2 Project for absolute beginners. We'll also be exploring the following stuff along the way- Tomcat 7, Apache 2, mod_proxy.

My paper got published recently and I'm pretty stoked about it, especially since undergrads rarely get to publish, let alone with first authorship. I'd like to take a moment to share my thoughts on the research process that culminated in this achievement.

Initially, I had decided on a project and supervisor relatively late in the semester. It was related to the Prisoners Dilemma, and I was tasked with running an arbitrary bunch of experiments to simulate agent interactions. Those first few weeks, I really thought hard. I read voraciously. The whole time, I was really under pressure to come up with something innovative and interesting. Soon, I had a rough idea. I was pretty excited about modelling noise in these agent interactions, and some realistic form of noise, something which wasn't boring. Interactions between people are affected by things like language, culture, etc (i.e., noise), and it would've been really cool to model these types of interactions. Now I needed to formalize this idea.

This was a painful process and I spent a bunch of sleepless nights crying myself to sleep (cue laughter). One fateful dinner, my group of friends, none of them CS majors, were discussing their projects. Hearing mine, one of my friends went "Hey that cultural thingy you were blabbering about- that kinda sounds like something we learnt in business class. I can't remember, but it has a name.". I then spent the next half an hour hounding her (some might call that harassment). Finally, I had the term I was looking for- pyschical distance.

The next step was far more rewarding. I thought of modelling sound waves as communication signals between agents in this Prisoner's Dilemma like game. These sound waves would be affected by the noisy effects of Psychical Distance. This was difficult- I had never taken a course in sound engineering. So I found a professor who knew things- sound things! Anyway, turns out, he couldn't help me. Another few sleepless nights followed. Finally, I gave in and visited the library. I remember hauling 10-15 sound engineering tomes to the nearby table, poring through those books in search of the elusive equation (which would help me design a function to model psychical noise). You should've seen me- disheveled hair, unshaved beard, baggy eyed. I was surprised no one mistook me for a hobo. Incredibly, I found a bunch of equations which fit perfectly into my model! That was a great day.

Fast forward presentation day, I had a really cool project which I had poured my heart and soul into. Too bad nobody really understood much of it.

Anyway, I wasn't done yet. I soon got a job, but I was quite relentless in designing new experiments in my spare time. My supervisor, suggested that we submit a paper. The publishing itself took nearly 8 months after but boy was I happy.

The whole research process was quite rewarding, but I'd like to highlight a few things I learnt-
1. Choose a good supervisor
2. Have varied interests (my project is essentially an amalgamation of comp sci, math, and business)
3. Talk to your friends
4. Textbooks in the library aren't just for show
5. Luck does play a part sometimes

Now I've not mentioned some of the more obvious and hackneyed advice that goes into research (work hard, don't give up, etc), but, uh, yeah, there's light at the end of the tunnel friends.
Posted by D at 20:32 1 comment:

Microsoft and Nokia recently unveiled the Lumia 920, which on face value, seems like a pretty good device. It boasts a dual core 1.5 GHz CPU, awesome camera, a nifty wireless charger (its pretty cool, but seems to add little value in my opinion), an apparently sharp display and to top it off, I personally like how the device looks. Its scheduled to be released later on this year though, presumably to avoid competing with the iPhone 5. It is a step in the right direction, but the main problem with Windows devices are apps.

Until Microsoft beef up their appstore, I personally don't see why people would go for a Microsoft device. Actually, the way I see it, its not about the number of apps, but rather, the number of good, free, apps. I really hope Microsoft are cognizant of this. The day they "fix" their appstore (and their dev framework) will be the day I'll start taking them as serious players in the smartphone market.
Posted by D at 18:07 5 comments:

A little bit about Git

Its going to be difficult for me to go back to SVN. Git has made version control a cinch; I actually look forward to creating, merging and switching branches. SVN users may recall the tedious experience of working with branches.

The magic is in the "distributed" approach that Git takes. What this means is that, you can actually get the entire history of your remote repo and store it locally (with SVN, you'd only have the latest revision, and not the whole history). Changes can be made locally, without needing to go online.  It is only when you push local commits to the remote repo (so that others can fetch and merge your changes) that you need internet connectivity.

I actually remember that in my previous company, where we used SVN, sometimes, the server would go down and you'd be stuck, unable to commit and collaborate until the problem was fixed. With Git, this could've been circumvented if somebody had just pushed his copy to another server, since this copy would essentially contain the whole history of the project.

One of my favourite Git features is to stash changes. Essentially, users can choose to store their current working changes away and switch to another task immediately. They can later unstash and continue working on the older task.

Also, specific commits can be cherry picked to be applied to a different branch, partial file commits are possible- the possibilities are endless.

The only downside is that the learning curve is slightly steep initially. This shouldn't deter developers though, as the whole experience of switching from SVN to Git is immensely rewarding.
Posted by D at 12:09 No comments: